Getting Ultra Fast Fibre Broadband installed in your apartment 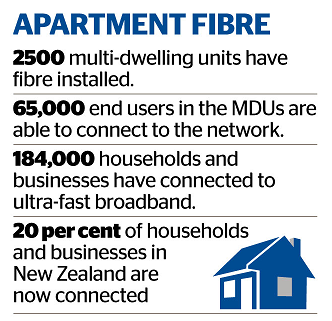 So... you're a young professional living in a cool part of town or the CBD and you have your funky two bed apartment, cool electronics, a funky coffee machine and home entertainment system all ready to binge watch the latest season of Game of Thrones through Neon, Lightbox or NetFlix and you load it ...up.... to... find... you... j... j... j... j... just keep on... buf... buf... b... b... b... bufferinnnnnnnnnnggggg...

there have however been a few problems and in an article today in the NZ Herald the concerns were highlighted by some Body Corporate managers in Auckland's CBD who said that whilst the construction phase of getting fibre connected to the actual building - overseen by Chorus - was relatively smooth, people within the individual units then struggled to connect their individual apartments to the ultra fast fibre network.

A telecommunications industry spokesman says the organisations involved in the fibre roll-out need to get better at sharing information so the sometimes troublesome installation process can improve for people in apartment blocks.

People wanting to get ultra-fast broadband in apartment buildings and other multi-dwelling units (MDUs) have raised concerns around the speed and complexity of the installation process.

Chief executive of the Telecommunications Users Association (TUANZ) Craig Young told the Herald Business that there was a delay between the installation of fibre into MDUs and users then being able to connect through their individual NZ broadband internet service providers.

Service providers and fibre companies such as Chorus, shared information on what stage installations were at, but that information would not always be up to date, Young said.

"There's an ongoing issue, it seems, with the interface between the fibre companies and the service providers in ensuring the data is up to date.

"The interface between those two organisations is not working as well it could be."

Some of the Herald readers shared their struggles with getting connected to ultra-fast broadband network.  One individual, Andrew Stanley, who lives in the Heritage Tower in Nelson Street, Central Auckland said he was told last April that the apartment building was connected to the fibre network and each floor was connected. He then requested ultra-fast broadband from Vodafone in September, but is still not connected and won't be until April 2016!  But another example was quoted named Keith Taylor.  Mr Taylor moved into an apartment building on Auckland's North Shore last winter and said he was able to connect to the ultra-fast broadband network through a "small and nimble" Internet Service Provider within a week of moving in.

Industry representative Geoff Thorn, chief executive of the Telecommunications Forum, said the industry was "refining its processes", but denied a lack of communication as being the cause of difficulties in MDU fibre broadband installations.

Manager of consents and acquisition at Chorus, Mark Mayerhofler, said Chorus and ISPs maintain communication throughout the installation process and the most common difficulties arise during the consent process, this is often delays caused by rental tenants wanting the connection and needing consent from their landlords.

One thing that we are trying to do here at Broadband Compare is to level the playing field for all the different Fibre Broadband Internet Service Providers in New Zealand to ensure that NZ consumers and businesses can compare fibre broadband providers in a fast, free and simple way so that they can find that "small and nimble" ISP or choose to go with a bigger brand that they already know.  The important part is that people become aware of the number of different choices that are available in New Zealand when it comes to connecting to the internet.

One very important point that Mr Thorn, chief executive of the Telecommunications Forum did make was that the connection process for fibre broadband is not always fully appreciated.  He said, "I don't think people understand that this is actually a construction job. It's like putting a new bathroom into your house - it's not going to happen overnight.  The industry is looking at a range of options."

So if you are considering fibre broadband and live in an apartment don't be put off.  Your building might already be connected and as there is usually no cost (at present anyhow) to connect the individual apartment to the fibre in the building you should join the queue and get it done.  If you are a tenant then explain to your landlord how it makes their property more desirable and if you are an apartment owner then what are you waiting for?!  Compare NZ internet providers for your address now on Broadband Compare and find the best internet package for you.

A version of this story originally appeared in The NZ Herald on 29th March 2016 written by Sophie Ryan.

You can view that story here